Opera… the upper attic – addic(-tion) – ‘opera’ as in work, life work –  the one place, (the attic) where all the media / the work comes together – my art historic training – having been submerged in the opera world for most of my teens and twenties through my mothers opera work – my visual art – my vocal art – my sense of performance – my emotional self – all those rehearsals / shows witnessed, that have become part of my language, my toolbox. In a way, i’m sure the Operatic also influences the other red lines flowing from me, but it’s hard to tell what way the stream flows.

What comes from the attic has various densities, from full blown opera productions for instance the Hans og Gréta production in Iceland (Engelbert Humperdinck), with the marvellous Óp-hóppurinn, or Mozarts Bastien Bastienne at Summer Opera Alden Biezen (Belgium) to theatrical forms that are based on singing, but not an actual full blown written out opera, like ‘Als je slaapt’ – created around the notion of lullabies in classical music, a show for kindergarden children (and older), with the magnificent soprano Chia-Fen Wu, Dirk Moelants on viola la gamba and Dimos de Beun on clavicembalo. Or even further, a theatrical production using excirps from Das Wohltemperierte Klavier by J.S. Bach, combining it with videowork to create a ‘music box’ performance for children.

Or using classical music references as for instance The four Seasons by Vivaldi in the collaboration with director Ewout D’Hoore, – but reworking the music to be sung by patients of a psychiatric institution. Working with professionals, or teaching singing students from the Royal Conservatory of Brussels or Ghent, to act. Or speed directing Bernsteins West Side Story, on the water in Ghent, for the Festival of Flanders, with choreograpy by Sidi Larbi Cherkaoui – with fireworks… 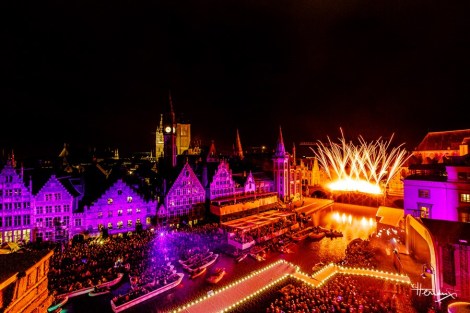 Or simply directing contemporary opera, like the monologue Infinito Nero by Salvatore Sciarrino (the first opera I ever directed, for de Klankfabriek, Belgium, in collaboration with Theater Transparant).

Or singing, Kafka Fragmente, a composition by György Kurtág, that I got a chance to perform in Moskow with immensely inspiring violinist Vladislav Pesin, at the Outer Space Festival, invited by Vladimir Jurowski. A piece based on fragments from Kafka’s dairies, where each song is a miniature universe of its own.

In the future composer Esther Venrooy and i will be working together to create a new opera – written for my voice –  to be created for Ragen in the Netherlands in 2018. Point of departure will be the story of Echo in Ovids Metamorphosis – the performance will take place in a stone quarry.

The piece “Lass mich Loss”,  based solely on compositions by female composers from medieval times up to now, with Chia Fen Wu, Dirk Moelants, Sabrina Avantario  will continue to evolve and take it’s full theatrical form over the course of 1018.

Salomé – a collaboration with Icelandic opera singer Bylgja Dís Gunnarsdóttir – is also a long time dream coming slowly true. The story of Salomé has long fascinated me, and we’re developing an alternative to Strauss’s full opera, but without loosing the connection to his marvellous score.

Recently I’ve started combining my poetic sound performances with aria’s, it’s a new road, let’s see where it will lead.

…and so the threads spin… and entangle themselves into pattern